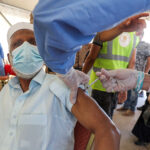 The Libyan Government of National Unity allocated 500 million Libyan Dinars to address a number of COVID-19 measures, according to a statement by the government.

The sum would be used as part of the chapter five of the emergency expenditures, the government said.