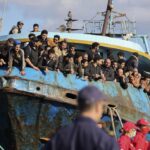 Greece rescues migrant boat with 483 people after sailing from Libya

Greek authorities say a dilapidated fishing boat crammed with migrants that was towed to port after losing steering in rough seas south of Crete was carrying a total of 483 people who had sailed from Libya.

The coast guard said Thursday that those on board were Syrians, Egyptians, Pakistanis, Palestinians and Sudanese and included 336 men, 10 women, 128 boys and nine girls. They were all were transferred Wednesday afternoon to a ferry docked in southern Crete for temporary housing.

The passengers had been crammed into a 25-meter (82-foot) fishing boat that had set sail from Libya and had been heading to Italy, the coast guard said. Passengers on board made a distress call when the vessel ran into trouble and lost steering while sailing in the Mediterranean off the southern Greek island of Crete in the early hours of Tuesday.

A major rescue operation was mounted, involving a Greek frigate, two coast guard vessels, five nearby merchant ships and two Italian-flagged fishing boats. The adverse weather conditions, with strong winds and rough seas, prevented the passengers from being transferred to any of the other vessels, and the fishing boat was eventually towed to a port in southeastern Crete by one of the Italian-flagged fishing vessels.

0 0
Previous : MP: HCS-HoR meeting in Sirte to focus on executive authority
Next : Libyan MP: All agreements signed by Dbeibeh government are illegitimate