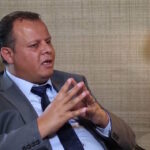 Libyan MP: All agreements signed by Dbeibeh government are illegitimate

Libyan Parliament Member Talal al-Maihoub said all agreements signed by the government of Abdul Hamid Dbeibeh, whose mandate has expired, are illegitimate, and any concessions that the government waived or agreements it signed that were not approved by Parliament are considered illegal and cannot be implemented.

Al-Maihoub called in press statements on the countries that sign agreements with Dbeibeh’s government to respect Libya’s sovereignty, adding that such steps are illegal and rejected by Parliament, which withdrew confidence from the government.

0 0
Previous : Greece rescues migrant boat with 483 people after sailing from Libya
Next : Regional conference on cross-border cooperation between Libya and Sahel concluded in Tunis