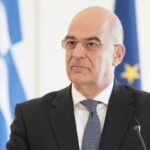 Greek Foreign Minister: We want to demarcate our borders with an elected Libyan government

Greek Foreign Minister Nikos Dendias said his country is looking forward to an agreement to demarcate exclusive economic zones with Libya as soon as an elected government emerges in the country.

In an interview with the media during a meeting with his Lebanese counterpart Abdullah Bou Habib on Friday, Dendias indicated that this agreement will create a new triangle of stability represented by Greece, Egypt and Libya in the eastern Mediterranean, wishing that this example would extend to Turkey.

“Athens looks forward, after the elections in Turkey, to be able to negotiate with Ankara on the maritime dispute in the eastern Mediterranean,” the Greek minister added.

0 0
Previous : Williams: Dbeibah stopped municipal elections because he wants to create his own support network
Next : Italy opens tendering for construction of coastal highway in Libya