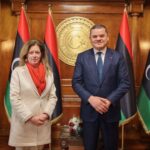 Williams: Dbeibah stopped municipal elections because he wants to create his own support network

Ambassador Stephanie Williams, the former UN envoy to Libya, said that Abdel Hamid Dbeibah, head of the Interim Government of National Unity, stopped the municipal elections because he wanted to create his own support network at the municipal level, adding that “Dabaiba must be confronted with this because there are postponed municipal elections that must be held throughout Libya.”

“The Libyan elections will not produce a miracle or solve everything in Libya, and yet there is no military solution to the crisis,” Williams explained in a press statement today.

“We need an active electoral process in Libya because without it you will have an insatiable appetite for the interim executive authority, and the Libyan Political Dialogue Forum proceeded to dialogue with the help of the international community when it was late in accomplishing its task of agreeing on the constitutional basis for elections,” the US diplomat stated.