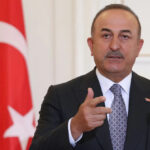 Turkish Foreign Minister Mevlut Cavusoglu admitted that the maritime memorandum with Libya “is not an international agreement, because the UN-backed government is not authorized to sign.”

“The maritime agreement signed between Turkey and Libya in 2019, is just a memorandum, and it cannot be approved by the Libyan Parliament,” Cavusoglu said at a parliamentary meeting last Tuesday regarding the 2023 budget, according to press leaks.

The Turkish minister pointed out that the interim Libyan governments were established under the initiatives of the United Nations, and that they are not authorized to sign international agreements, but they are able to sign memoranda.

Cavusoglu told the deputies that Turkey approved the 2019 memorandum in its parliament because the memorandum of understanding included the establishment of an economic zone in the Mediterranean, pointing out that the interim governments in Libya are not obligated to parliament’s approval of the memoranda.

He added that similar to Turkey, Egypt also signed memoranda of understanding with Libya, and the Speaker of the Libyan House of Representatives, Aguila Saleh, was not very concerned, stressing that Ankara had developed relations not only with the UN-backed Tripoli government, but also with opposition forces in Tobruk and Benghazi.

0 0
Previous : Saleh and Al-Mashri to meet today in Turkey to agree on a constitutional basis, MP confirms
Next : Williams: Dbeibah stopped municipal elections because he wants to create his own support network