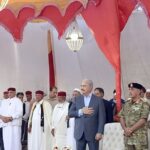 Field Marshal Khalifa Haftar, the General Commander of the Libyan National Army (LNA), visited the eastern city of Marj on Thursday, where he held a rally to “underscore the city’s role in fighting terrorism”, according to a statement by Marj Security Directorate.

In a speech during the rally, the LNA commander stressed that the city had a “significant role” in aiding the army during its 2014 Operation Dignity.