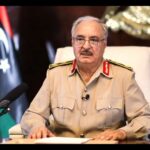 Field Marshal Khalifa Haftar, General Commander of the Libyan National Army, welcomed the reopening of the coastal road linking eastern and western Libya, which was announced by the Joint Military Committee 5+5 on Friday afternoon, calling for the removal of foreign forces from Libya.

“The General Command of the Libyan National Army welcomes the results of the discussions of the 5+5 committee regarding the reopening of the coastal road,” Haftar said in a televised speech on Friday. “Achieving the just and comprehensive peace that Libyans aspire to will not happen unless all foreign forces and mercenaries leave the Libyan territory, unconditional removal sooner rather than later.” He added.

“The international community should be well aware that we mean what we repeatedly say that there is no peace with the occupier, no peace with the mercenaries, and no peace except that arms are in the hands of the state,” he warned.

“We hold the international community, which adopts and supports the peace process in Libya, responsible for redoubling its efforts to the maximum extent to achieve this popular demand.” Haftar concluded.

0 0
Previous : No meeting between Dbeibeh and Haftar due to budget dispute, source
Next : UNSMIL welcomes reopening the coastal road, praises the efforts of 5+5 JMC