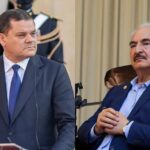 No meeting between Dbeibeh and Haftar due to budget dispute, source

Abdul Hamid Dbeibeh, Prime Minister of the Government of National Unity, and Field Marshal Khalifa Haftar, the Libyan National Army’s General Commander, will not be meeting any time soon due to a dispute over the state budget, an informed source told The Libya Update.

The source, who asked not be named, said that the dispute between the two stems from the government’s decision to allocate funding for armed groups based in western Libya, while “trying to financially restrict” the LNA.

“The positions taken by [the interim government], led by Dbeibeh, reveal that it is biased in favor of one warring party over the other,” the source said. “It is not a government of national unity as it claims, which may push for the emergence of a new competing government in Cyrenaica”.

“This will bring the country back to square one in which division and armed conflict prevail,” the source added.

Media outlets had reported that Dbeibeh and Haftar are due to meet soon in Benghazi following Egyptian mediation.