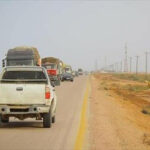 The United Nations Support Mission in Libya (UNSMIL) has welcomed the official opening of the Coastal Road, linking eastern and western Libya, which was announced today by the 5+5 Joint Military Commission.

The Special Envoy of the Secretary-General for Libya and Head of UNSMIL, Ján Kubiš, “hailed the ongoing efforts and achievements of the 5+5 Joint Military Commission and its sub-committees for laying foundations for durable peace in Libya,” UNSMIL said in a Friday statement.

“The opening of the Coastal Road is another step in strengthening peace, security, and stability in the country, and in the unification of its institutions,” said the Special Envoy. “The exemplary work of the 5+5 JMC is also a signal to the leaders of the country to set aside their differences and work together to implement the Roadmap and hold elections on 24 December 202,” the statement reads.

“The next major step in the Ceasefire Agreement’s implementation process is to commence the withdrawal of all mercenaries, foreign fighters, and forces from Libya without delay, starting with the withdrawal of the first groups of foreign mercenaries and fighters from both sides,” said the Special Envoy for Libya.

“The Mission renews its call to all concerned national and international parties to expedite the implementation of the Ceasefire Agreement and to support the exemplary efforts of the 5+5 Joint Military Commission,” UNSMIL concluded.