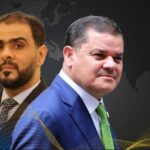 Hammad: We will take escalatory measures to stop the flow of oil revenues to NOC

Osama Hammad, Minister of Planning and Finance in the government appointed by the House of Representatives, said that he will take “escalatory measures” to stop the flow of oil revenues to the National Oil Corporation account “in order to preserve them.”

The minister in Fathi Bashagha’s government in Benghazi added that the financing of the Dbeibeh government in Tripoli “contradicts the decisions of the House of Representatives and a blatant assault on public money.”