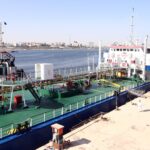 Hariga oil port, located in the eastern city of Tobruk, will resume production after the oil ministry reached a settlement with the port workers who shut down production in protest against workplace conditions, the ministry announced in a brief statement on Wednesday.

The National Oil Corporation (NOC) has also released a statement confirming that the Hariga oil port will resume production, citing a mediation between Mustafa Sanalla, the NOC chairman, the port workers.

0 0
Previous : Libya, Egypt to cooperate on aviation
Next : Libya, Tunisia agree on security and health protocols to resume traveling