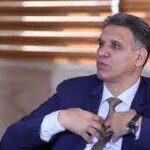 Qziet added in press statements that Russia and Britain are among the great and important countries in the Libyan file.

HCS member explained that the importance of this move now is that it came with the end of the mandate of Abdul Hamid Dbeibeh’s government.

He concluded that undermining Dbeibeh’s government or replacing it with the Bashagha’s government is a real and existing opportunity.