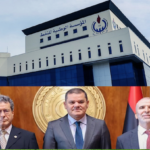 Libyan outgoing Prime Minister, Abdul Hamid Dbeibeh, announced Thursday his approval of the proposal of the Oil Minister, Mohamed Aoun, to change the board of directors of the National Oil Corporation (NOC), headed by Mustafa Sanalla.

This came during the eighth regular meeting of the Cabinet for the year 2022, held in the town of Jadu in the west of the country.

Dbeibeh demanded that Aoun present candidates to lead the post, instead of Sanalla.

The Oil Minister said, during the meeting, that he presented a number of names as proposals to chair NOC Board of Directors, calling for the non-interference of quotas, as the position requires competencies.

Dbeibeh said: “We agree with this proposal, and this I think needs to be studied by specialists, after which we submit it for approval.”

He explained: “I do not think that quotas will be the first principle and the distribution of positions, I think it should be according to competencies, but it is possible to take quotas as a second principle into consideration, and most importantly, a person from outside the sector should not come to take over NOC board of directors.”