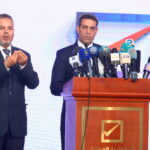 The High National Election Commission (HNEC) announced on Sunday that the aspiring nominees for the presidential and parliamentary elections, set for December 24, can officially file for candidacy tomorrow.

He also announced that voter ID cards for the 2.8 million registered voters will be distributed in 1,906 polling situations across the country starting tomorrow. Voters are required to present personal ID upon collecting the voter cards in order to prevent fraud, he added.

The HNEC chairman revealed that the commission had received from the House of Representatives all the technical amendments relating to the electoral laws, which he says would “enable the commission to implement the two electoral processes without challenging the implementation procedures.”