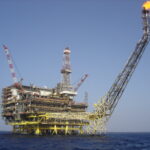 Two people are dead and two others are reported missing following  an accident that took place on Friday afternoon in the offshore platform of the Bouri oil field, which is operated by the Mellitah Oil and Gas company, Italian news agency Nova reported.

At least six people were also reported to be injured in the accident, which occurred during the dismantling and towing process of a floating tank that has been out of service since 2017. The Bouri oil field is located about 120 kilometers from the coast of Zawiya in western Libya.

The victims are all Tunisian nationals.

The consulate of Tunisia in Libya confirmed the news and explained that search for the missing is still ongoing in coordination with the Libyan authorities. The Tunisian consulate explained that the victims “fell from the height of the floating tank following a structural break”.