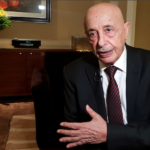 HoR will withdraw confidence from GNU if it does not attend parliamentary questioning, Speaker says

Speaker of the Libyan House of Representatives (HoR), Aqila Saleh, said if the Government of National Unity (GNU) does not attend the session that HoR will hold for questioning it, the House will withdraw confidence from it.

The Government did not unify the state institutions, did not involve all the regions in the country’s administration, and did not succeed in the files of electricity and COVID-19, Saleh confirmed in press statements.

HoR did not grant GNU Head, Abdul Hamid Dbeibeh, confidence in his capacity as Minister of Defense, and hid government allocated a budget for the militias larger that the budget it allocated for the Libyan National Army (LNA), the Speaker added.

Regarding the military institution, saleh pointed out that the only body qualified for unifying the Libyan Army is the 5+5 Joint Military Committee (JMC).

For the elections, HoR Speaker said that he had communicated with Fathi Bashagha, Interior Minister of the former Government of National Accord (GNA), and Egypt for holding the elections on their scheduled date, December 24.

It is noteworthy that the Media Advisor of HoR Speaker, Fathi al-Maryami, had stated that HoR was preparing for questioning GNU on August 30.