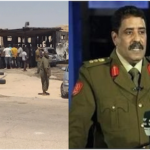 Al-Mismari stressed that the bomber was confronted by LNA forces at the checkpoint and seriously wounded, then died after he was transferred to the hospital.

There were no human casualties among the LNA units, according to the Spokesman.

0 0
Previous : Electricity connection between Libya and Egypt is strategic goal for both countries, says minister
Next : JMC continuing its work on ceasefire and mercenaries exit, says member