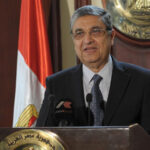 Electricity connection between Libya and Egypt is strategic goal for both countries, says minister

Egyptian Minister of Electricity Mohamed Shaker said that launching electricity connection projects between Egypt and Libya is a strategic goal for both countries.

Shaker explained that Egypt is keen to supply Libya with its needs of electric power to contribute to the reconstruction.

He pointed out that Egypt succeeded during the last period in generating electricity for Libya through existing projects.

He continued by saying that Egypt is constantly working to strengthen the links with neighboring countries such as Jordan, Sudan and Libya.

He announced that the goal in the coming period will be to achieve electrical connection with Europe through submarine cables that will reach more than one country within Europe.

The minister revealed that his ministry is studying a project to connect electricity with Cyprus and then with Crete and Greece.