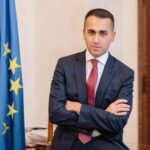 Italian FM: Elections will allow us to stabilize Libya

“The legitimacy of the new institutions with the popular vote will allow us to stabilize a country that is Europe’s gateway to Africa,” said Di Maio, speaking at the fifth Festival of Religions which took place  at the Basilica San Miniato al Monte in Florence.

He also highlighted that the West “must make an examination of conscience” regarding the destabilization of some countries. “We Westerners destabilized Libya ten years ago,” he said, recalling the “choices that led to the overthrow of the dictators” which was not followed by the ability of civil society to find new leaders.