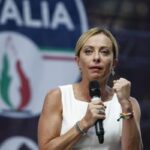 The founder of a far-right Italian party and frontrunner to be the country’s next leader has called for a blockade of Libya to stop migrants crossing the Mediterranean, according to British newspaper the Daily Mail.

Giorgia Meloni, leader of the Brothers of Italy party, wants the Italian navy to blockade the north African coast so that all migrants can be screened before leaving to ascertain whether they are genuine refugees.

Those who can prove their refugee status should be allowed through, Meloni said, while those who cannot should be sent home.

The 45-year-old is current frontrunner to replace Mario Draghi in a general election that is due to be held in September after Draghi’s government collapsed.

Meloni, who counts the likes of Italy’s former interior minister Matteo Salvini and former leader Silvio Berlusconi as her allies, made the comments at the weekend.

Speaking to a TV channel owned by the Berlusconi family, she said: ‘The problem of migrant arrivals on our shores must be tackled at its source, with a “naval blockade”.’

Likening the plan to EU proposals to get tough on border security, she added: ‘[This] is no different than a European mission to negotiate together with Libya, the possibility to block the inflatable boats during their departure.’

But Meloni’s plans came under attack by political opponents, who said any attempt to blockade the shores of a foreign nation would be a de-facto declaration of war.

‘Meloni, do you know that under international law it is considered an act of war,’ tweeted former house speaker Laura Boldrini.

‘Do you know that more ships would be required than the navy has? Do you know the number of dead would outnumber those rejected?’

But Meloni remained undeterred, writing on Facebook that: ‘Those who blabber on today that the naval blockade cannot be done because it is “an act of war” demonstrate their total ignorance on the issue of immigration.’

Meloni is on track to become Italy’s first ever female leader following a September 25 election sparked by Draghi’s resignation as Italy’s Prime Minister.

Her party – Brothers of Italy – is seen as the successor to Italy’s old fascist movement, and she began her career in politics in the Italian Social Movement which was founded by ex-fascists after the Second World War.