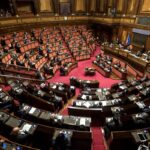 Italian senators representing the L’Alternativa c’è political party called for the government to stop funding for the “Libyan-Turkish coast guard”, during a parliamentary session on Wednesday.

According to Italian news agency Ansa, the Italian Senate was holding a discussion on the refinancing of international military missions, when senators of L’Alternativa c’è abruptly interrupted the discussion to shout “stop the financing of the Libyan-Turkish coast guard”.

The incident led the president of the Senate Anna Rossomando to suspend the session for five minutes.

It is noteworthy that Rear Admiral Fabio Agostini, the commander of the European Union’s Operation IRINI, told Italian press in July that the operation stopped providing training for the Libyan Coast Guard and Libyan Navy because “the rug was pulled by the main players such as Russia and Turkey”.