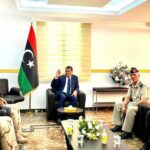 Abdul Hamid Dbeibeh, Prime Minister of the Government of National Unity, held talks on Wednesday with members of the 5+5 Joint Military Committee to discuss the challenges that committee faces in its work, as well as its upcoming plans.

At the start of the meeting, the Libyan premier thanked “all members of the committee for their efforts to complete the opening of the coastal road, which contributed to more stability and alleviated the suffering of the people,” according to a statement by the government.

Dbeibeh also learned about “the difficulties and obstacles facing the committee’s work in a number of issues […] as well as the committee’s plan after completing the opening of the road and the steps to be implemented”.