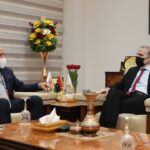 The chairman of the National Oil Corporation (NOC), Mustafa Sanallah, discussed on Tuesday with the director of the Libyan branch of the Spanish oil company Repsol, Simone Sciamanna, the need to carry out the necessary maintenance work at thefacilities of Sharara oilfield, according to a statement released by the NOC on Wednesday.

“The company has strategic objectives of extreme importance for the national economy”, Sanallah was quoted as saying in the statement. He mentioned above all the increase in production rates and stressing that these results will be obtained only with continuous maintenance of the infrastructure.

For his part, Sciamanna affirmed the need to carry out infrastructure maintenance in Sharara, so that Repsol can achieve its objectives and maintain production in the years to come. The executive expressed the desire of the Spanish company to return to exploration activities in Libya, particularly after the stabilization of security in the country.

Repsol is carrying out “intense” and “serious” studies, Sciamanna said, to move into solar power generation in the near future, and the results of such preliminary research will be presented to NOC as soon as they are completed