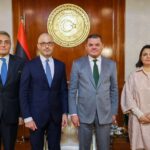 Italy encourages Libya to set a new date for the presidential and parliamentary elections without resorting to a new transitional phase, according to a statement by the Libyan government on Monday.

This came during a meeting between Libyan Prime Minister Abdul Hamid Dbeibeh and Italy’s Special Envoy to Libya Nicola Orlando.

Both sides discussed bilateral relations “especially in the areas of health, energy and combating illegal immigration, in addition to directing the completion of some agreed strategic projects.”