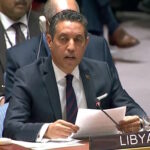 Libya Rep in UN: GNU will hand over power to elected government

Libya’s Permanent Representative to the United Nations, Taher al-Sunni, affirmed that conflicting internal interests and the continuation of foreign interference in Libyan affairs prevented the holding of elections on December 24.

In his briefing before the Security Council on Monday al-Sunni stressed that in the absence of a constitution or an alternative constitutional base, holding elections will be difficult.

Al-Sunni indicated that the Government of National Unity (GNU) would formally hand over power to a new elected authority.

Al-Sunni called on the United Nations to support the political process more effectively to ensure access to elections and fulfillment of the people’s demands.

0 0
Previous : Schools closed in some Libyan cities due to weather conditions
Next : Italy encourages new date for Libya elections without transitional period