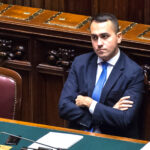 Italy’s top diplomat to visit Libya “in the coming weeks”

Luigi Di Maio, Italy’s Foreign Minister, announced on Wednesday that he will visit Libya “in the coming weeks” to continue “essential diplomatic action”.

The Italian top diplomat spoke during hearing before the joint Foreign and Defense Commissions of the Italian Chamber and Senate. He said that a lasting stabilization of Libya remains a priority for his government.

“The visit of [Italian Prime Minister] Draghi to Libya last April and those of [Libyan Prime Minister] Dbeibeh and the [chairman of Presidential Council] al-Menfi to Italy are testimony to the increased Italian commitment,” Di Maio said

“I myself have been to Tripoli several times since the new government took office and I mean to return to Libya in the coming weeks,” he added.