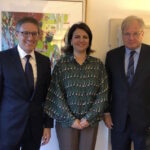 Libyan Foreign Minister, Najla Manqoush, held a meeting with the US State Department’s Counselor, Derek Chollet, and the US Ambassador to Libya, Richard Norland; On the sidelines of the 77th session of the United Nations General Assembly.

The meeting discussed the latest political developments in Libya, the Government of National Unity said Thursday.

The meeting stressed the importance of supporting efforts to make the political track a success. arriving at the national elections as soon as possible; to bring stability and prosperity to the Libyan people, according to the government’s statement.

Chollet said he “had a constructive meeting with mangoush, pointing out that “Libya’s leaders urgently need to work with UN Special Representative in Libya Abdoulaye Bathily on a Libyan-led path to hold elections without delay.”

0 0
Previous : Audit Bureau: Dbeibeh lavished his guests with LYD 12 million worth of gifts
Next : On Iternational Day of Peace, UN express its commitment to advance peace and elections in Libya