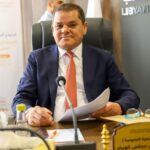 Audit Bureau: Dbeibeh lavished his guests with LYD 12 million worth of gifts

Abdul Hamid Dbeibeh, the Libyan prime minister of the Tripoli-based government, have used public funds to award his guests with luxurious gifts during his first year in office, the Audit Bureau revealed in a damning report about the Libyan government’s expenditures in 2021.

Dbeibeh, who ascended to power last year under UN-backed plan for political transition in Libya, have spent over 12 million Libyan dinars on expensive watches as gifts for his guests, according to the Bureau’s report, which also revealed that Dbeibeh has personally authorized the payments.

The Audit Bureau stated that excessive spending for numerous services was charged by the 63-year-old premier’s suite. An example highlighted in the report was a million-dinar bill for food and cleaning services which Dbeibeh spent on November 2021 alone.