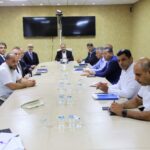 The Turkish company GAMA could carry out the expansion and restoration works of the Gulf Steam Station power plant in Sirte, Libya.

This was the focus of a meeting in Tripoli between the chairman of the Board of Directors of the General Electricity Company (GECOL), Muhammad Mashhai, and the representative in Tripoli of the Turkish GAMA Company.

The parties, according to a statement from GECOL, discussed “the roadmap for the completion of the installation works and the execution of operational tests for the production units of the station”.

0 0
Previous : Corruption reported by Libyan Audit Bureau was only tip of iceberg, says activist
Next : Audit Bureau: Dbeibeh lavished his guests with LYD 12 million worth of gifts