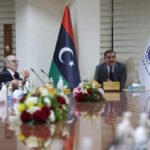 The Libyan Prime Minister, Abdul Hamid Dbeibeh, affirmed his government’s full support for the oil sector as it is an important and vital sector and that it represents more than 95% of the revenues of the Libyan state.

He also urged the National Oil Corporation (NOC) to invest and open new horizons for cooperation with major international companies in the field of oil, gas and energy, in addition to benefiting from their expertise in the areas of renewable and clean energies, to maintain and sustain production rates in support of the national economy.

Dbeibeh’s affirmation came in his meeting today, Monday, with NOC Chairman and members of its Board of Directors, and heads of oil companies, in addition to workers at Sharara oil field affiliated to Akakus Oil Operations Company’s who participated in the meeting via a closed circuit.

0 0
Previous : No Turkey-backed fighters left Libya, says Syrian Observatory
Next : US Embassy calls for investigation in killing migrant and wounding 15 others in Tripoli