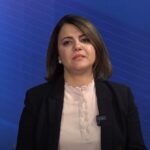 TRIPOLI – Libya will introduce a national initiative at the second Berlin Conference on Wednesday to allow the Libyan people to “take matters into their own hands”, announced the country’s foreign minister on Tuesday.

In a recorded statement made to mark her 100th day in office, Najla Al-Mangoush said the initiative called “Stability of Libya”; and will focus on “creating executive mechanisms to solve the security and economic problem”

Mangoush said the initiate will specifically address the unification of Libya’s military institutions and setting a clear timeline for the withdrawal of all foreign forces and mercenaries.