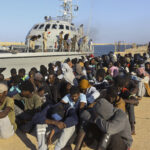 The Libyan Coast Guard has intercepted 165 migrants who were on their way to European shores on a rubber boat, announced authorities on Thursday

According to a statement by the Libyan navy, the migrants left the Libyan shores from the western city of Zawiya before they made a distress call and got intercepted by the coast guard.

One person reportedly died of drowning during the incident.

The Libyan navy said it will consult with other Libyan authorities to arrange for the deportation of these migrants to their countries.