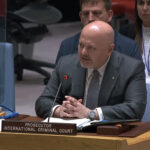 Outlining a new four-pronged investigation strategy to the Security Council on Thursday, the prosecutor of the International Criminal Court (ICC) pledged his commitment to delivering justice against crimes committed in Libya.

“This situation cannot be a never-ending story”, said Karim Khan, Prosecutor of the International Criminal Court.  “Justice delayed may not always be justice denied, but justice that can still be arrived at.”

Presenting the 23rd report on the Libyan file, Khan said survivors and the families of victims are waiting for justice, and the report contains benchmarks for the first time to help move cases forward.

“Our new approach prioritizes the voices of survivors”, he said. “To do so we must move closer to them. We cannot conduct investigations, we cannot build trust, while working at arms-length from those affected”

He said the first pillar of the new approach is to prioritize the referrals made by the Council, by allocating additional resources and focusing on enhancing financial investigation, together with increasing capacity in investigating sexual and gender-based crimes.

To accelerate investigations, his team is also harnessing the power of new technology, including artificial intelligence and machine learning to support the transcription and translation of Arabic language documentary, video and audio files.

The second is a commitment to empower witnesses and survivors to participate in the Office’s work.  The Hague, where the Court is based, is far from Libya. It is not possible to establish meaningful relationships with victims, by engaging at arms’ length. It is vital to work shoulder-to-shoulder with the affected communities, he told ambassadors.

Prosecutor #KarimAAKhanQC outlines his renewed strategy in the #Libya situation: "Our new approach prioritises the voices of survivors. To do so we must move closer to them. We cannot conduct investigations, we cannot build trust, while working at arms length from those affected" pic.twitter.com/CLxgHMs4zh