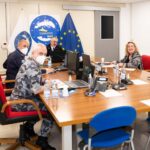 Operation IRINI commander: Operation is not solution to Libya crisis

Operation IRINI is part an integrated European approach that includes political, military, economic and humanitarian efforts to stabilize Libya, but is not the solution to the country’s crisis, said the operation’s commander, Rear Admiral Stefano Turchetto, on Thursday.

Turchetto made his remarks during a webinar organized by Operation IRINI titled “Fight against illicit trafficking in the central Mediterranean, in the Sahel and in the Gulf of Guinea,” according to Italian news agency Nova. The webinar was attended by the EU Special Representative for the Sahel Emanuela Del Re and Charles Fries, Deputy Secretary General for Common Security and Defense Policy and Crisis Response of the European Eternal Action Service (EEA), among other officials.

But while Turchetto underscored that Operation IRINI is not salvation for Libya, he did describe it as “an important tool to set the conditions for diplomacy to allow a permanent solution for stability in Libya.”

“Although the arms embargo is our primary task, the other tasks are no less important on the international stage and for their effects on the maritime security of the central Mediterranean, on the security of Libya, but I would also say on the stability of the Sahel,” he said.