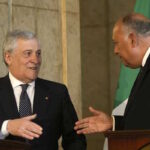 Libyan crisis solution must be reached through cooperation from all major parties, says Italian FM from Cairo

A solution for the Libyan crisis must be reached through cooperation from all major parties, Italian Foreign Minister Antonio Tajani said on Sunday, also stressing that Egypt is playing an important role in facilitating such cooperation.

The discussions also tackled the Palestinian cause, irregular migration, the energy file, developments in the Eastern Mediterranean, food security and the repercussions of the Russian-Ukranian crisis.

In early January, Egypt facilitated a meeting in Cairo between rival Libyan leaders Speaker of the House of Representatives Aguila Saleh and Head of Higher Council of State Khaled Al-Mishri.

Egypt’s Ministry of Foreign Affairs welcomed the outcomes of the meeting, describing it as an “important step” towards holding presidential and parliamentary elections simultaneously as soon as possible.

“Egypt will always remain supportive of the choices of the Libyan people and the role of the Libyan institutions in a way that leads to achieving security, stability, and unity in Libya,” the foreign ministry said at the time, adding that Egypt will also support Libya in a way that leads to the exit of all foreign forces and mercenaries from Libyan lands.