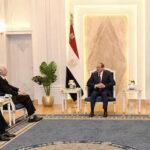 The meeting witnessed discussion of ways to enhance security and intelligence cooperation between the two countries, as well as an exchange of views on developments related to a number of international and regional issues of common concern, according to the official Spokesman of the Egyptian Presidency.

Al-Sisi welcomed the American official and asked to convey his greetings to the American President, Joe Biden, stressing the strength of the Egyptian-American relations.

He also stressed the importance that Egypt attaches to strengthening the firm cooperation between the two countries in various fields, especially at the security and intelligence levels, and to support efforts to restore and stability in the Middle East in light of the challenges it is witnessing, the Spokesman said.

For his part, Burns conveyed to Al-Sisi Biden’s greetings, as well as his assurances on the importance and strength of the Egyptian-American relations, with Washington looking forward during the coming period to develop relations of cooperation and partnership with Egypt, which is considered the center of gravity of the Middle East and the pillar of security and stability in it under the leadership of Al-Sisi, especially at this delicate stage, which is witnessing international and regional crises, he added.

0 0
Previous : Ship with over 700 containers docks in Misurata coming from Turkey, heading to China with 3,500 more
Next : Libyan crisis solution must be reached through cooperation from all major parties, says Italian FM from Cairo