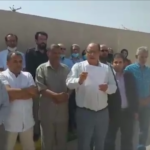 Libyan University Faculty Members Syndicate has called on all its members to engage in an open strike starting next Sunday, due “the government’s disrespect for the academic elites and ignoring their demands.”

The Syndicate’s call for the strike came after the Prime Minister of the Government of National Unity (GNU), Abdul Hamid Dbeibeh, said that his government did not intend to increase the faculty members wages at the time as it did for teachers in the primary education.

“The Prime Minister’s statements are irresponsible, and are a dangerous indicator and a demolition factor,” the Syndicate said in a statement on Sunday.

“The position of the Prime Minister encourages brain drain,” it pointed out.

“All faculty members must take a stand towards the government,” it added.

0 0
Previous : Menfi urges candidates not to take part in election without legal framework
Next : 46 LPDF members demand UN envoy to hold emergency session of the Forum