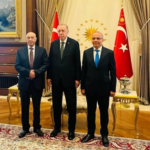 Al-Lafi said, via Twitter, that the meeting with Erdogan dealt with political developments, noting that the views agreed on preserving Libya’s unity, expediting the holding of elections, through one strong government, and emphasizing the exclusion of a military solution.

For its part, the Turkish state-run Anadolu Agency said that the meeting between Erdogan, Saleh and al-Lafi took place in the presidential complex away from media.

It added that the meeting was attended by the Speaker of the Turkish Parliament, Mustafa Sentop, who had previously met with Saleh.

Sentop and Saleh chaired a meeting of the two countries’ delegations after their bilateral meeting at the Turkish Parliament headquarters in Ankara.