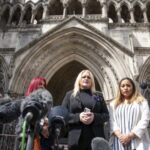 Greece charges 5 with smuggling 96 migrants to Italy by sea

Five people were arrested on a Greek island Tuesday and charged with trying to smuggle nearly a hundred migrants into Europe on an unsafe vessel last week, using what appears to be a new direct sea route from crisis-afflicted Lebanon to Italy, Associated Press reported.

It was the second such incident in about a month involving a boat departing Lebanon. The more common sea route for asylum seekers from the Middle East and Africa seeking a better life in Europe is from Turkey to Greece or Italy. But it has become less used amid increased vigilance by Greek and European Union border agencies.

Greece’s coast guard said Tuesday that the suspected smugglers were detained from among 101 people on the motor yacht found drifting last Thursday 75 miles southeast of Greece’s southeastern Aegean island of Karpathos. It said the suspects included nationals of Afghanistan, Iran and Turkey.

The migrants, including 40 children and 19 women, were taken to a camp for asylum seekers.

“Due to the high number of passengers and the poor health conditions, the vessel was unseaworthy,” the coast guard said in a statement Tuesday. It said the migrants — whose nationalities were not made public — had paid between $6,500-8,000 each to be taken to Italy.

On June 28, 166 migrants on an unseaworthy fishing boat that had left Lebanon for Italy were rescued off Karpathos. Greece’s coast guard charged six people on board with migrant smuggling in that case.

According to the United Nations refugee agency, UNHCR, in the first half of this year only about 2% of migrants arriving in Italy by sea had left from Lebanon, compared to 55% from Libya and 21% from Turkey.

But the UNHCR said last week that’s a significant increase from previous years.