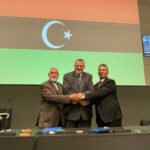 The 5+5 Joint Military Committee action plan for the withdrawal of foreign forces was leaked to the press today, according to 218 TV.

The plan, which was agreed upon in Geneva earlier this week, states each Libyan party will retreat to certain points in two specific cities, to establish good will between the parties.

The third stage includes the process of monitoring the real numbers of foreign forces and mercenaries by the observers ahead of the evacuation.

In the fourth and final step, foreign forces are deported from Libya in successive batches, according to a specific timeline, the details of which have not yet been revealed.