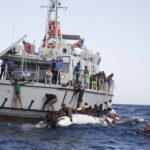 EU to provide Libyan Coast Guard with boats despite crimes

The planned delivery comes in light of a recent UN rights report describing conditions in Libyan migrant detention centres as a possible crime against humanity.

The boats will be used by the Libyan Coast Guard, which often intercepts migrants at sea and return them to Libya where some are likely to end up in such detention centers.

The commission says it had already delivered three rehabilitated boats, also funded by the EU.

EU Observer reports that the commission did not specify the delivery date for the new P150s.

“We will communicate when they are delivered,” a commission spokesperson said in an email, last week.

The EU’s statement followed a UN human rights council report, citing a litany of crimes at detention centres that “may amount to crimes against humanity.”

This includes “reasonable grounds to believe” that acts of murder, torture and rape against migrants form part of a systematic and widespread attack directed at this population.

“Further investigations are required to establish the role of all those involved, directly or indirectly, in these crimes,” it said.

When pressed on the UN report by EU Observer, the European Commission denied any responsibility for facilitating their interception and return to the detention centers.

“The main objective of the support is to help contribute to saving lives,” said a commission spokesperson, noting that detention centers need to be shut down.