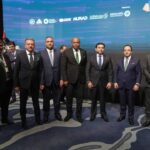 The “First Conference for Investment in Africa – Libya its Gate” was held in the Turkish city of Istanbul for two days, under the supervision of the Ministry of Foreign Affairs and International Cooperation in the government of Abdul Hamid Dbeibeh, according to what was announced by the Undersecretary of the Ministry, Omar Katti.

Katti said that the conference seeked to establish “clear mechanisms for a real and strategic partnership between Libyan investment institutions and Turkish companies as a first stage, provided that this partnership extends to regional and international countries interested in investing in the African continent.”

The Undersecretary of the Ministry of Foreign Affairs for Organizations and International Cooperation confirmed that his government “has developed a new approach for the return of investment inside Libya and within Africa in order to achieve the aspirations of the Libyan state and its regional and international partners.”

0 0
Previous : Italian envoy to Libya: We support the urgent resumption of the political process in Libya
Next : Libyan parliament speaker holds talks with Qatari ambassador