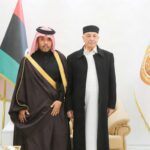 The Speaker of Libya’s House of Representatives, Aguila Saleh, held talks on Thursday with Qatari Ambassador to Libya, Khaled Al-Dosari, at his office in the city eastern city of Qubba.

The two discussed “bilateral relations”, “developments in the situation in Libya” and “ways to end the Libyan crisis through holding elections,” according to a statement by House spokesman Abdullah Bliheg.

Bliheg said that the Qatari diplomat affirmed Qatar’s support for Libya in “overcoming the current crisis and preserve the unity of the Libyan soil”.

0 0
Previous : Libyan-Turkish conference discusses investment partnership in Africa
Next : Libyan FM in Barcelona to take part in Union for the Mediterranean conference