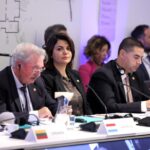 Libyan Foreign Minister Najla Mangoush arrived in Barcelona on Thursday where she attended a conference by the Union for the Mediterranean.

On the sidelines of the conference, Mangoush held talks with a number of her European and Mediterranean counterparts, including Spain’s José Manuel Albares, Malta’s Ian Borg, Slovania’s Tanja Fajon and other foreign diplomatic representatives, according to Libyan Foreign Ministry.

The Union has the aim of promoting stability and integration throughout the Mediterranean region. It is a forum for discussing regional strategic issues, based on the principles of shared ownership, shared decision-making and shared responsibility between the two shores of the Mediterranean.