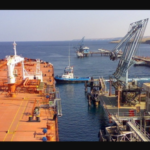 Head of the Zueitina Oil Port Workers Union, Maree Bridan, confirmed the continuation of the port closure and the cessation of oil exports.

Bridan said in press statements Sunday that most workers at Zueitina Port refuse to close it and demand its opening, stressing that it is not in anyone’s interest to continue closing the ports and oil fields.

He pointed out that the sit-in in front of the National Oil Corporation and those demanding the opening of ports and fields have no choice but to demonstrate and pressure for the opening.