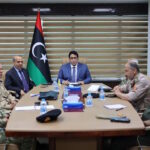 The President of the Libyan Presidential Council (PC) Mohamed al-Menfi, discussed with members of the 5+5 Joint Military Committee (JMC), what the committee accomplished during the past period, and ways to maintain the continuation of calm in Libya.

Al-Menfi discussed a number of obstacles and organizational issues facing the committee’s work and ways to solve them, so that it can continue to perform its entrusted roles, according to PC Media Office.

The members of the committee reviewed before PC President the results of the committee’s meeting with all its members, on the sidelines of the disarmament, demobilization and reintegration meeting, on Libya, which was recently hosted by the Spanish government under UN auspices.

Al-Menfi stressed the importance of the commitment of all parties to find a solution to the current crisis in order to reach the elections that all Libyan people aspire to.

He praised the efforts of the Committee in supporting the peaceful path and maintaining stability in the country.