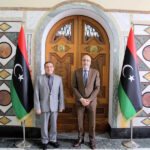 The Governor of the Central Bank of Libya (CBL), al-Siddiq al-Kabir, met Thursday in his office with the Ambassador of Malta to Libya, Charles Saliba.

Al-Kabir and Salibia discussed “issues of common interest”, CBL said in a statement on its official Facebook page.