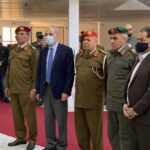 Members of the 5+5 Joint Military Committee has called on Khalifa Haftar, leader of the Libyan National Army (LNA), to take drastic measures with the goal of enforcing a blockade on the government of Abdul Hamid Dbeibeh.

The LNA representatives accused the Libyan prime minister of corruption, violations of the political agreement and obstructing the committee’s work.

They also denounced his decision not to hand over power to his political rival, Fathi Bashagha, who was designated as the country’s prime minister by the House of Representatives months ago.

In response to “this dangerous slope”, the LNA representatives called on Haftar to shut down oil exports, close coastal road linking the western and eastern regions of Libya, halt domestic flights between the two regions and cease all cooperation with Dbeibeh’s government.