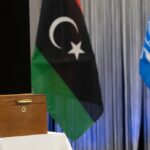 TRIPOLI – A member of the High National Election Commission (HNEC), Abdel Hakim Balkhair, announced that the HNEC is due to open the electoral register to all voters on July 4 and the opening of the registry will be announced in a press conference, which will inform the public through the HNCE’s media office.

In media statements, Balkhair added that the process of opening the register would make registration available to all wishing to register who have reached a majority of 18 years old, including those wishing to change their previous electoral status.

Balkair added that there are at present 30 registration centers, distributed throughout various Libyan cities, with two million and 400,000 citizens registered for voting to date.